Spirits of Amazonia II will be available on 22.06 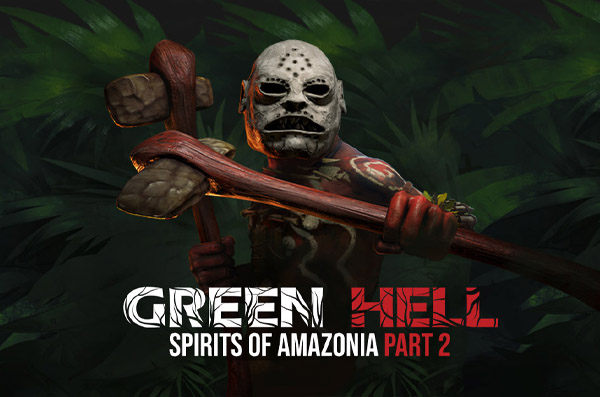 Spirits of Amazonia 2 will enhance Green Hell with new storylines and more jungle areas for players to explore. Along with the expansion pack, the game will also feature another enemy type – Thug and new animals – black panther and small tapir. SOA 2 will release on Tuesday, June 22 at 7pm, along with a -30% promotion on Steam. Like the first part of the expansion pack, the update is free for current Green Hell owners.

– The second part of Spirits of Amazonia is an important moment in the life cycle of Green Hell. Past history indicates that such large expansion packs combined with promotions have always caused our game’s popularity to spike while affecting wishlists. We believe that this time will be no different – comments Krzysztof Kwiatek, CEO of Creepy Jar

So far, the game Green Hell was played by more than 2 million Steam users, and the periods of highest popularity of the game were associated with updates: Co-op mode from April 2020 and the release of the first part of Spirits of Amazonia in late January 2021. The success that the game has achieved has caused Creepy Jar to seek to penetrate the market as much as possible. Green Hell debuted on PlayStation 4 and Xbox One consoles on June 9, with a port to the latest generation of devices coming in the near future. At the same time, a collection for the board version of the game, created by Galaktus Games, will soon be launched on Kickstarter.

Creepy Jar is a game developer, specializing in survival simulation genre. The Company has gained international recognition as the creator of Green Hell – the best Polish game of 2019 according to Digital Dragons. This is an advanced survival simulator based in the Amazon rainforest. The production is characterized by exceptional realism and excellent detailing. The game debuted in the Early Access formula in August 2018, with a full release a year later in September 2019. So far Green Hell has had a very successful co-op version and the first part of the free Spirits of Amazonia expansion pack.

The studio was founded in 2015 by industry veterans gaining experience on the biggest and most important Polish productions. The Company’s strategy and philosophy is to create games with the so-called long sales tail. Creepy Jar is still working on and developing its first project Green Hell and expanding to other platforms – the company is planning launches on PlayStation and Xbox consoles. In addition, the company’s next title, Chimera, a mysterious base-building survival set in a sci-fi theme, is in production.

Creepy Jar has been building its prestige and credibility through transparent corporate policy. The Company was listed on NewConnect since 2018 and moved to the main floor of the WSE in April 2021.

It’s Time To Take It to the Treetops in the

Building Update to be released 23 January

Create Your Very Own Amazonian Fortress of Solitude – Building

Spirits of Amazonia Part 3 just released on PlayStation and Xbox

Spirits of Amazonia Part 3 just released on PlayStation and

Read More »
PrevPoprzedniXbox One and PlayStation 4 is coming!
NatępnyGreen Hell is getting great reviewsNext
❮ ❯